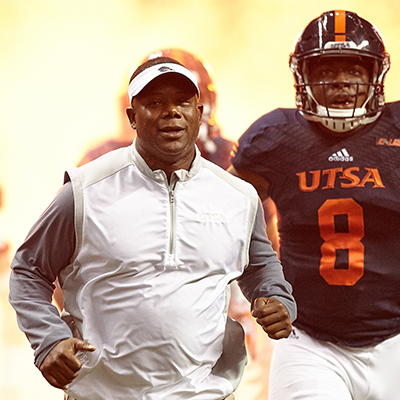 Enter to win 4 tickets to the UTSA-Charlotte game.

Be in the Alamodome this Saturday, Nov. 26 to watch the UTSA Roadrunners play for history against Charlotte at 6 p.m. With a victory over Charlotte, UTSA will officially become bowl eligible for the first time in the program’s six-year history and Head Coach Frank Wilson’s first season.

UTSA is 5-6 on the season, and 4-3 in Conference USA play, which is good for second in the West division behind Louisiana Tech (8-3, 6-1) while Charlotte (4-7) owns a 3-4 C-USA record in the East division. Last season, the Roadrunners got past the 49ers in overtime by a score of 30-27 in the first meeting between the two programs.

Based on this week’s media projections UTSA is favored to head to the Gildan New Mexico Bowl which will be in Albuquerque, N.M. on Dec. 17th at 1 p.m.