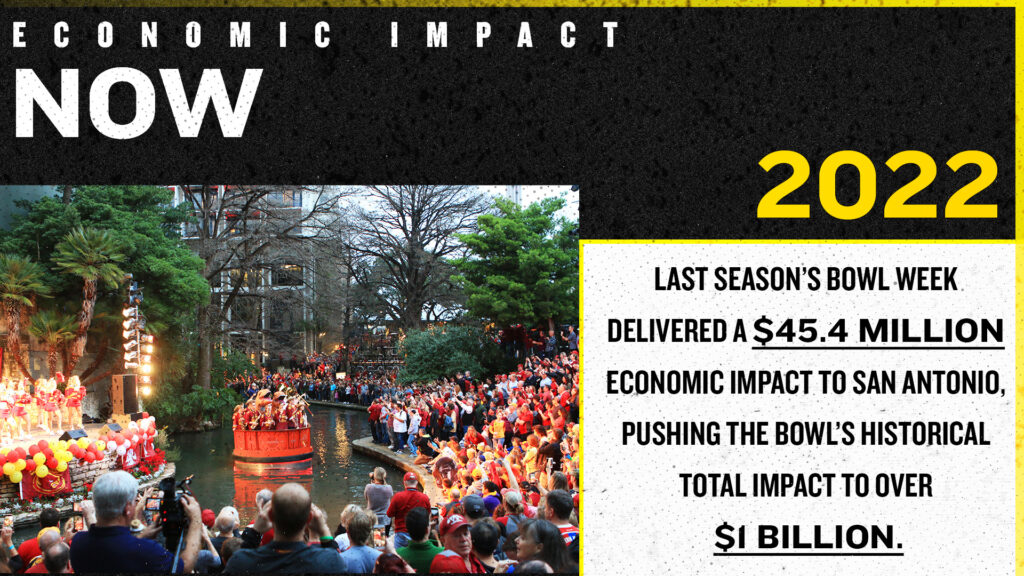 Before the inaugural Valero Alamo Bowl in 1993, the end of December was one of San Antonio’s slowest times for tourism. There was so little visitation that the city would drain River Walk for repairs Now, the holidays are vibrant as Bowl Week annually delivers an average $40+ million total economic impact to our city.

In addition to this historical $1 billion impact, the Valero Alamo Bowl has showcased San Antonio to 156 million viewers watching the 29 games on ESPN and the 1.7 million fans attending in person at the Alamodome.

Our title sponsor, Valero, fueled our growth by helping us raise our combined team payouts from $1.4 million in 1993 to $9.4 million in 2022. That means higher profile teams now come to San Antonio as we match up the top teams from the Big 12 and Pac-12 conferences after the CFP selections, bringing greater visibility and visitation to the city.

Fans watching the 2021 Valero Alamo Bowl saw Hall of Fame Head Coach Bob Stoops lead #16 Oklahoma past #14 Oregon 47-32 in one the largest offensive displays in bowl history as the teams combined for 10 touchdowns and 1,000+ yards.

Over the past 29 years, the Valero Alamo Bowl has been fortunate enough to host some of college football’s most exciting players.

For years now, attending the Valero Alamo Bowl means getting a chance to witness iconic college players and future NFL stars play on the Alamodome turf.

The growth of the Valero Alamo Bowl has allowed our community outreach to expand every year. A scholarship program that started in 2000 with $52,000 in awards has now grown into a program that gives out over $1 million to students across San Antonio. Even with the attendance restrictions during COVID in 2020, the Valero Alamo Bowl still gave out over $1 million in scholarships.

The 2022 season will feature record scholarship distributions of $1.1 million. This total is the largest among all bowl games and allows the Valero Alamo Bowl to provide scholarships to deserving students from every San Antonio area high school and university.

This season, 90 high school students and 97 university students received scholarships from the Valero Alamo Bowl. Fans at the 2022 game will see the 1,500th winner be recognized on the field during the first quarter.