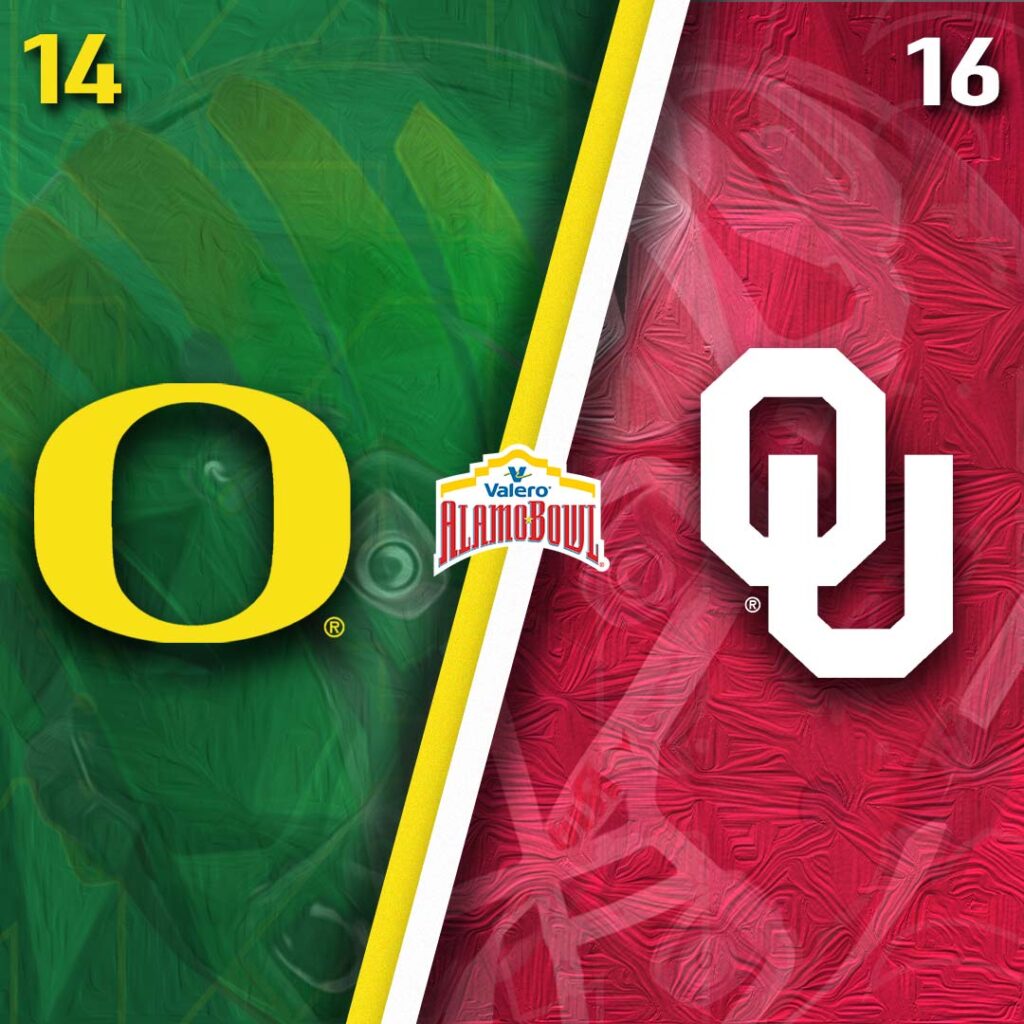 The 2021 Valero Alamo Bowl between #14 Oregon and #16 Oklahoma will kick off at 8:15 p.m. CST in San Antonio’s 65,000 seat Alamodome. Tickets are available through Ticketmaster and the Alamodome Box Office starting at $50.

It will be the 8th meeting between these two teams. The first coming in 1958 and the last in 2006 when the Ducks edged the Sooners at 34-33 in the only game the two teams have played in Eugene. The Sooners had won the previous six meetings.

This is the second time the Sooners are playing Oregon in a bowl game. In the 2005 Holiday Bowl, Sooners linebacker Clint Ingram intercepted a pass at the 10-yard line with 33 seconds left to seal a 17-14 victory for Oklahoma. Thus, the last two times they have faced off the games have been decided by a combined 4 points.

This is the eighth year the Valero Alamo Bowl has matched up the top team from Pac-12 and Big 12 conferences after the CFP selections. The matchup has yielded six Top 15 matchups and teams with a median CFP ranking of 14.

Outside of last year’s shortened season, the Valero Alamo Bowl has hosted at least one 10+ win team in the CFP era, but this year is the first time in the Bowl’s 29 year history it has matched-up two 10+ win teams.

This is the fourth time the Valero Alamo Bowl has hosted the Pac-12 Championship Game runner-up. In the 10 year history of the conference’s Championship game, the runner-up has yet to win their bowl game.

Eleven Valero Alamo Bowls since 2005 have been decided in the final minutes of the game including the 2017 and 2018 games that were each decided by two points.

There have only been three interim head coaches in the Valero Alamo Bowl history before this year. In 2009, Texas Tech’s Ruffin McNeil took over for Mike Leach and beat Michigan State 41-31 in what is still the most watched game in Valero Alamo Bowl history. In 2007, Texas A&M’s Gary Darnell took over for Dennis Franchione and lost to Penn State 24-17. In 2003, Nebraska’s Bo Pelini replaced Frank Solich and beat Michigan State 17-3.

Last year, Texas scored 55 points in their Valero Alamo Bowl win. Ten years ago, the Valero Alamo Bowl set the NCAA record for the most combined points scored in the postseason football game with a combined 123 points scored. If either of those occurrences happen this year, one lucky person that enters here by December 28 will either win 50,000 or 500,000 Southwest Airlines Rapid Rewards points, respectively, to celebrate the airlines 50th anniversary.

The Ducks come to San Antonio with a 10-3 record ranked #14 in the CFP Poll. This is their 5th straight season playing in a bowl game and have made the postseason in 23 of the last 25 seasons.

Ironically, both Cristobal and Richt departed for head coaches jobs at the University of Miami. McClendon will also leave the Ducks for Miami following the Valero Alamo Bowl to serve as their wide receivers coach.

This is Oregon’s third apperance in the Valero Alamo Bowl, all against Hall of Fame caliber coaches. In 2013, #10 Oregon beat Texas 30-7 led by offensive MVP Marcus Mariota as the Ducks spoiled Mack Brown’s last game as the Longhorns head coach. The #15 Ducks lost to #11 TCU and Head Coach Gary Patterson 47-41 in triple overtime in the 2015 Valero Alamo Bowl.

Oregon quarterback Anthony Brown led the Pac-12 with 38 completions of 20+ yards this season. Running back Travis Dye had at least 100 scrimmage yards in 8 of the last 10 games and finished with 17 total TD (15 rush, 2 receiving).The most rushing touchdowns in a Valero Alamo Bowl history is five by Baylor’s Terrance Ganaway in 2011 followed by three scores from Oregon’s Royce Freeman in 2015 and Washington’s Keith Price in 2011.

The Sooners finished the regular season with a 10-2 record ranked #16 in the CFP poll. They are playing in a bowl for the 23rd straight season, the second longest active streak in FBS.

Oklahoma is coming off three consecutive College Football Playoff appearances. A victory in the Valero Alamo Bowl will mean seven straight Sooner seasons with only two losses and six of seven years with 11+ wins (last year in a shortened season the Sooners were 9-2).

Bob Stoops will serve as interim head coach for the Valero Alamo Bowl after Lincoln Riley left for USC. Stoops, who was inducted into the College Football Hall of Fame on Dec. 7, posted a 190-48 (.798) record at Oklahoma and coached the Sooners to a school-record 18 consecutive bowl berths.

He retired as the only coach to win the Fiesta Bowl, Orange Bowl, Rose Bowl, Sugar Bowl and the national championship, and accumulated more victories over his first 18 seasons than any coach in the game’s history.

This will be the Sooners’ first appearance in the Valero Alamo Bowl. The Sooners are 1-0 all-time in the Alamodome. In the 2007 Big 12 Football Championship, Stoops led a 10-2 and #9 ranked Oklahoma to victory over #1 Missouri 38-17.

Oklahoma running back Kennedy Brooks out of Mansfield, Texas has rushed for 1,111 yards on 184 carries this season with 10 touchdowns giving him 8.2 yards per carry. The Valero Alamo Bowl record for most yard per carry was set last year by Texas’ Bijan Robinson with 18.3 per carry. Brooks is just the fourth Sooner to record three 1,000-yard rushing seasons in his career joining De’Mond Parker, Adrian Peterson, and Samaje Perine.