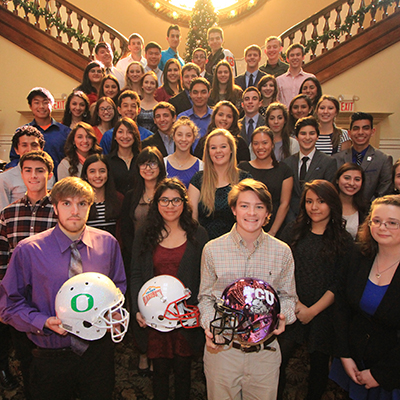 This year’s Valero Alamo Bowl delivered one of college football’s most exciting games on the field. However, there was lots to be excited about off the field as well as the bowl continued its efforts to make a difference in the San Antonio community.

The Valero Alamo Bowl awarded a record $450,000 at a special luncheon on December 16th to 58 graduating seniors selected from more than 30 different San Antonio high schools. Each winner received a scholarship of $7,500+ to attend the college of their choice.

This year’s total was highest in the bowl’s history and pushed the bowl’s local scholarship giving the last 16 years to $2.1 million. The scholarships were awarded on the basis of academic achievement, teacher recommendations, financial need, a personal narrative as well as involvement in extracurricular activities with priority given to students participating in varsity sports.

This year’s funding for the scholarship program comes from the proceeds of various bowl events as well as generous support from Frost, H-E-B, Mike Yantis, Jr., Shining Star ENERGY and Valero.

TCU and Oregon teamed up at the 2016 Valero Alamo Bowl to fight hunger in San Antonio. The teams squared off to see who could raise the most money to support the San Antonio Food Bank through the Valero Alamo Bowl Fight Hunger Challenge. By the end of the campaign, the two teams raised enough for the equivalent of over 28,000 meals with TCU being crowned as Fight Hunger Champions.