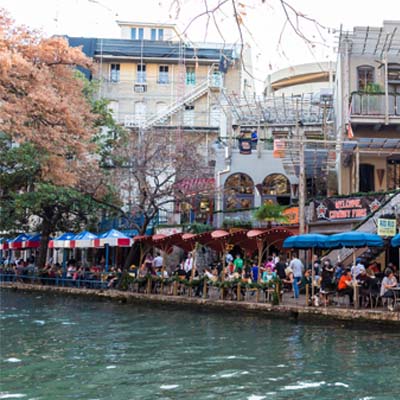 The View from the River – Rick Grinnan

What’s it like to be at a River Walk restaurant during Bowl Week? Well, it’s like getting a seat right in the middle of the best that the Valero Alamo Bowl has to offer. You’re surrounded by the teams, their families and friends—all decked out in school colors and united in complete enthusiasm.

As owner of The Republic of Texas Restaurant on the River Walk, I’ve spent two decades watching the Valero Alamo Bowl grow from the bottom rung of the bowl pecking order to one that now matches the top schools in must-see match-ups. It’s incredible.

Not only are people watching our city on TV and getting to know who we are, but we get to personally introduce San Antonio to new attendees every year. They want to know what happens in this gorgeous city along the river throughout the year including our annual celebrations like New Year’s Eve and Fiesta. They want to experience everything they can and come back for more. With each Valero Alamo Bowl, we create memories for people that they talk about for years to come.

Every year is different, but the game always seems to begin with a silence that builds to a deafening roar with each play and touchdown. My favorite Valero Alamo Bowl memory would have to be the Baylor game in 2011. Watching Robert Griffin III play, we knew something big was happening, but that’s the Valero Alamo Bowl for you. You get to see Heisman-winning talent in action.

One of my favorite things about the Valero Alamo Bowl that happens without fail each year is the way opposing teams and their fans come together. You’ll see this sea of two team colors along the River Walk merging in excitement and camaraderie. It’s not just contagious, it’s electric.

Once we had almost 100 people from one team come in and buy out the restaurant. As they were dining, four people from the other team came in and wanted to eat. The first team called out, “let them come on in here and join us.” It’s awesome to see that kind of spirit but even more awesome to be a part of it year after year.

This story comes from Rick Grinnan, owner of The Republic of Texas Restaurant on the River Walk.