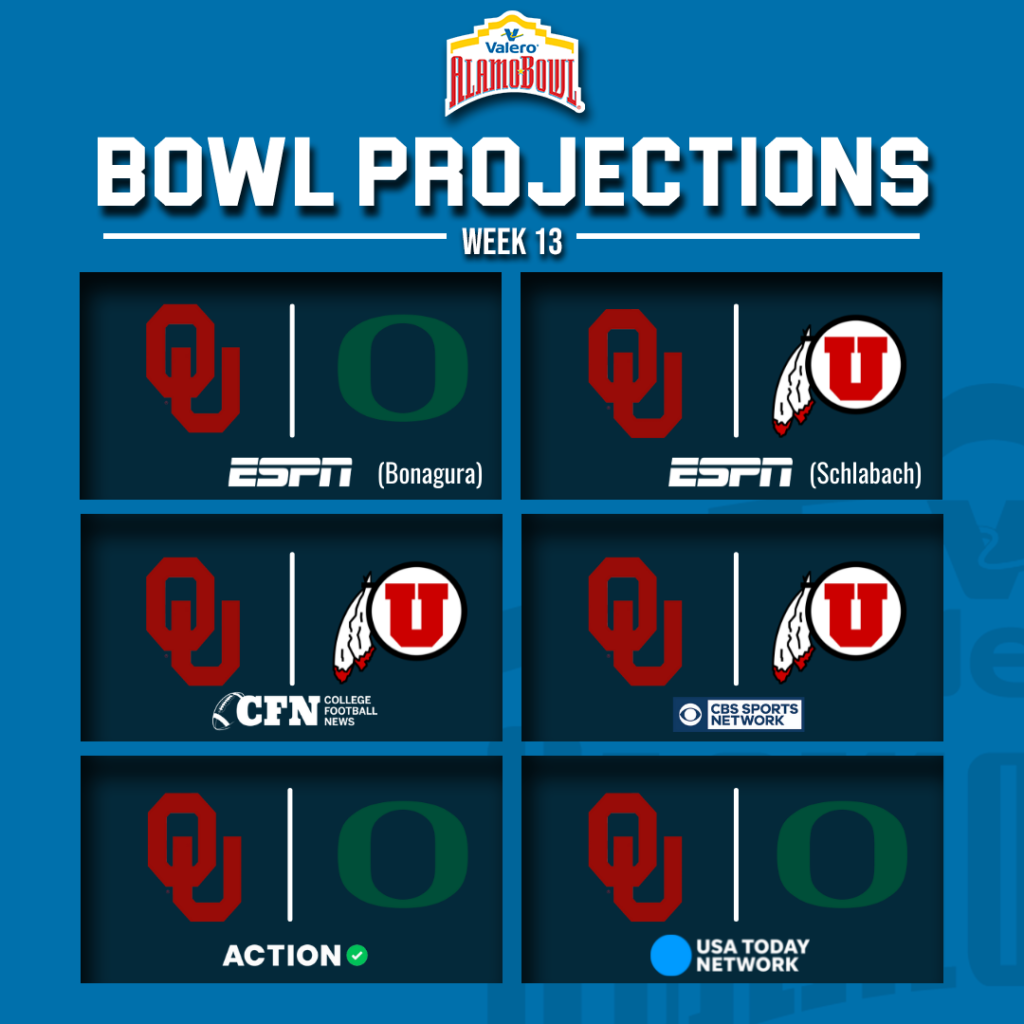 The regular season is over, so the media typically go into bowl projections overdrive updating their picks after each championship game result.

The Pac-12 Championship between #10 Oregon and #17 Utah kicks off at 5 p.m. CST on Friday. All major media outlets are predicting the winner of that game in the Rose Bowl and the runner-up to San Antonio.

Arizona State, UCLA, and Washington State will also be available when the Valero Alamo Bowl selects if Oregon loses Friday as they are within one game in the loss column with the Ducks.

The Big 12 Championship pits #5 Oklahoma State against #9 Baylor on Saturday at 11 a.m. CST. If Oklahoma State wins, they will go to the Allstate Sugar Bowl if they are ranked #5 or below in the final CFP poll on Sunday. If the Cowboys win and finish ranked #1-4, they earn a trip to a CFP semifinal playoff game and Baylor will go to Sugar Bowl.

If Baylor wins, most scenarios have them in the Sugar Bowl and Oklahoma State in a CFP (New Years Six) game as an at-large selection. Given the two Big 12 Championship participants are slotted into the CFP in all bowl projections, media have #14 Oklahoma slated for their first trip to the Valero Alamo Bowl.

The current media projections are below:

Here are the most up-to-date projections

The CFP host bowls will take a second team from either conference if their top teams finish ranked #1-4. That means if the season ended today, neither the Big 12 or Pac-12 would have a team in the semifinals.

If the Big 12 Champion doesn’t make the Top 4 they would go to the Allstate Sugar Bowl, while the Pac-12 Champion would go to the Rose Bowl. The Big 12 could also have a second team in the CFP bowls as at-large selection if they finish with a high enough ranking.

The official team selection for the Valero Alamo Bowl will be announced this Sunday around 3:30 p.m. CST. Beat the rush and buy your tickets today!