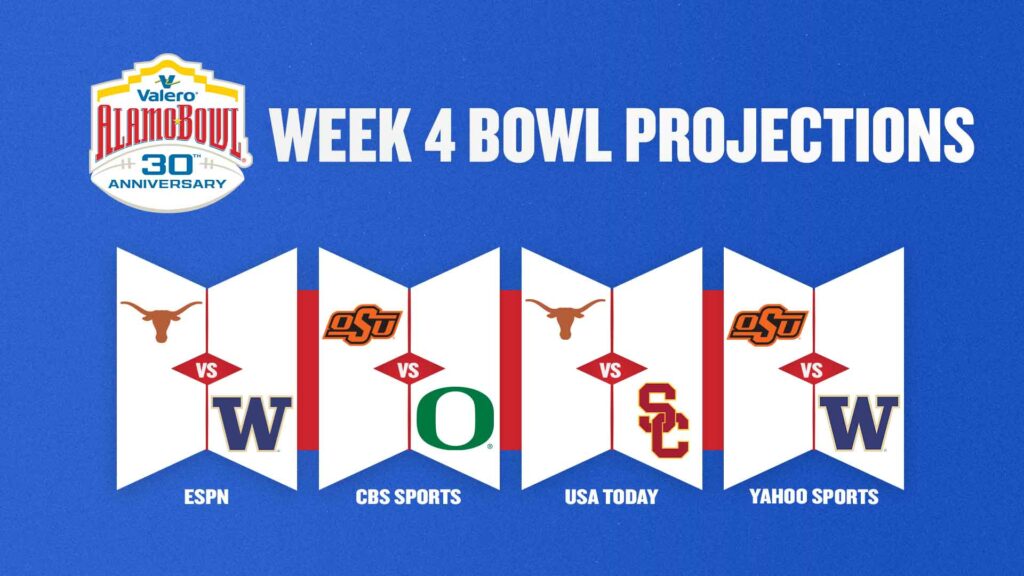 As we head into week four of the college football season, there are still plenty of potential matchups for the 30th Valero Alamo Bowl.

Washington (3-0), who was a bit of an afterthought after a 4-8 season last fall, has suddenly played their way into the top 25 rankings with a 3-0 start to the season. After a convincing win over a ranked Michigan State team, the Huskies look poised to emerge as a legitimate Pac-12 contender. Elsewhere in the Pac-12, Oregon State is 3-0 for the first time since 2014 and undefeated USC (3-0) is knocking on the door of the top five. Washington State (3-0) is undefeated as well, and both Oregon (2-1) and Utah (2-1) have managed to rebound nicely after suffering disappointing losses in week one. Troubles are abound in Tempe though, as Arizona State (1-2) Head Coach Herm Edwards was let go after their week 3 loss to Eastern Michigan.

The state of Oklahoma currently runs the Big 12. After a dominant win over Nebraska, Oklahoma (3-0) is holding firm to their #6 ranking in the AP poll. Oklahoma State (3-0) is breathing down their neck at #9 after a blowout win over Arkansas Pine-Bluff. Neither squad has had to face a ranked opponent so far though, so who knows what could happen once conference play begins next week. After giving #2 Alabama just about all they can handle in week 2 and securing a win over UTSA in week 3, Texas finds themselves at #22 in the AP poll. Baylor (2-1) fell to #17 the rankings after their week two loss to BYU, and have managed to stay put through week 3. Also, don’t look now, but Kansas (3-0) has started the year 3-0 for the first time in over a decade after back-to-back wins over West Virginia and Houston.

Bowl Projections: It’s still early in the season, so nearly everyone in both the Pac-12 and Big 12 still have a legitimate shot at playing in this year’s Valero Alamo Bowl. However, here are what some experts are saying so far:

For most teams around the country, conference play begins this week. It’s the special time of the season where football is already in full swing, but everyone’s hopes for a bowl game are still very much alive.