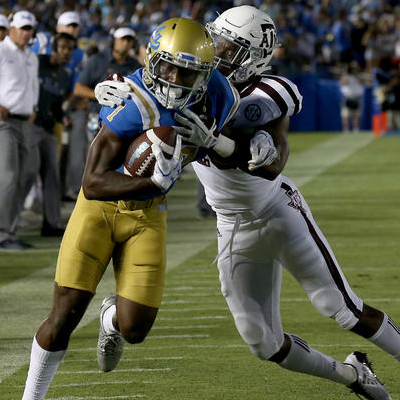 Week One in the Books

The College Football Season is officially underway after most teams played their season openers this past weekend. The Pac-12 went 11-0 in this weekend’s matchups, highlighted by a 34-point comeback from UCLA to beat Texas A&M 45-44 on Sunday.

In the most recent AP Top 25 poll, seven teams from the Pac-12 and Big 12 are ranked in the Top 25, with Oklahoma leading the pack ranked fifth. USC and Washington round out the Top 10 ranking sixth and seventh. Oklahoma State currently sits at No. 11, while Stanford remains ranked at No 14. WSU moved four spots up the list to No. 20, while TCU climbed to 23rd.

This upcoming week has two key matchups to watch: #5 Oklahoma at #2 Ohio State and #14 Stanford at #6 USC, the first in-conference game of the season for the Pac-12.

Want to be a VIP at this year’s Valero Alamo Bowl? Enter our You Pick’em Contest by predicting the winners of select Big 12 and Pac-12 games this week for your chance to win tickets and post-game field passes.

We may only be in Week Two of the season, but more early bowl predictions are continuing to roll in. After all, it doesn’t hurt to keep an eye on who may be playing in the Valero Alamo Bowl’s 25th Anniversary.

The Valero Alamo Bowl is looking for its fourth consecutive Top 15 matchup, so this year’s showdown is sure to be a crowd pleaser with multiple Pac-12 and Big 12 teams currently ranked in the AP Top 25.