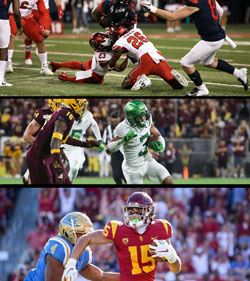 Who is coming to San Antonio?

All the bowls will announce their teams on Selection Sunday, December 8, following the mid-afternoon release of final CFP poll.

For the Valero Alamo Bowl, there are currently six Big 12 teams in our mix. Baylor, Texas and four teams who all play each other this weekend: Oklahoma at Oklahoma State and Iowa State at Kansas State.

The Pac-12 picture is clearer. One of these three teams is coming to San Antonio:

The Utes are one of the most well-rounded teams in the country. They rank ninth nationally in yards per play on offense and fourth in that same category on defense. The other two teams that can boast being Top 10 on both sides of the ball are #1 Ohio State and #3 Clemson.

Their offense is led by senior quarterback Tyler Huntley and senior running back Zack Moss. Hundley is #5 in the nation in passing efficiency and Moss is #5 in yards from scrimmage per game.

The Ducks surprising 31-28 loss to Arizona State dropped them out of the playoff discussion, but they have clinched the Pac-12 North division title and a win in the Pac-12 Championship game will secure them a spot in the Rose Bowl.

Senior quarterback Justin Herbert, a projected Top 10 overall selection in next Spring’s NFL Draft, has thrown for 2,966 yards and 30 touchdowns this year.

USC’s finished their regular season with a 52-35 win over rival UCLA. Since the Trojans handed Utah its only loss of the season, USC owns the tiebreaker and would be the Pac-12 South representative for the Rose Bowl if Utah loses this weekend to Colorado.

Against the Bruins, USC true freshman quarterback Kedon Slovis set a school record for passing yards with 515. He also threw four touchdowns and set a USC record as four of his receivers finished with over 100 yards receiving on the day.

While history tells us there will be another unexpected result or two in the final weeks of the season, here is an overview of how the six CFP games and Valero Alamo Bowl match-ups are set based on current rankings.