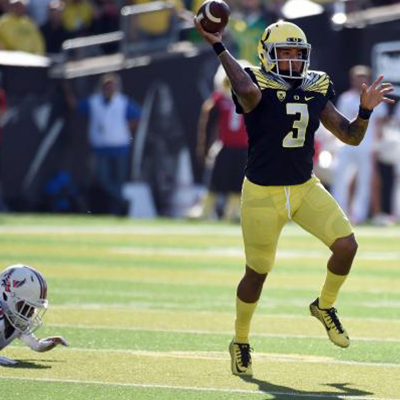 After knocking off South Dakota at home on Saturday, the Wildcats travel to the Alamodome to face UTSA. It will be Kansas State’s third game at the Alamodome in school history. In 1998, the #4 ranked Wildcats were upset by an unranked, Drew Brees-led Purdue Boilermakers team 37-34 in the Builders Square Alamo Bowl .

UTSA might not seem like much of a challenge for last year’s Big 12 Valero Alamo Bowl representative, but the Roadrunners put up a good fight on the road at Arizona last week, nearly pulling out their first win against a power 5 conference team in school history.

In the Pac-12, the #7 Oregon Ducks face one of their toughest road tests of the season as they travel to East Lansing, Michigan to take on #5 Michigan State. Although Oregon’s offense shined at home by putting up 61 points and amounting a total of 731 yards of offense against Eastern Washington, the Ducks’ defense allowed 549 yards of offense and 42 points to the Eagles, coming away with a closer-than-expected 61-42 win. Michigan State is coming off a close win of their own, defeating the Western Michigan Broncos 37-24 last week on the road.

Log on to http://bit.ly/HyundaiPickoff to make your Hyundai College Football Pickoff selections for Week 2 of the college football season and decide whether you think the Wildcats and Ducks will come away 2-0 after this weekend. No perfect brackets were submitted in week 1, so log on and turn in the first perfect selection sheet of the season. A winning submission will land you lower level tickets and pre-game and post-game sideline passes to this year’s Valero Alamo Bowl.

Want to see the Wildcats take on the Roadrunners? This week’s Gridiron Giveaway prize is a set of four 40-yard line tickets to Saturday’s Kansas State vs. UTSA game. Click here for your chance to win.