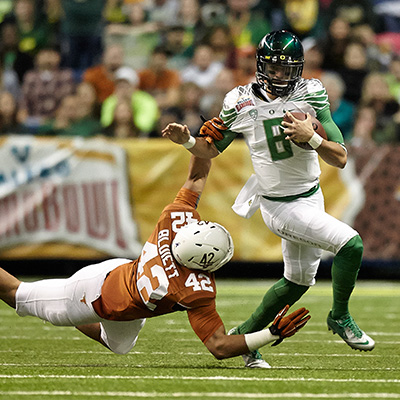 Will History Repeat Itself?

In 2000 Nebraska junior quarterback Eric Crouch led the Huskers to a 10-2 record, a win and MVP honors at the SYLVANIA Alamo Bowl and a Top 10 national ranking.

The following year as a senior, Crouch won the Heisman Trophy, the most coveted award in all of college sports, while leading Nebraska to the National Championship game against Miami.

In 2013 Oregon quarterback Marcus Mariota, like Crouch in 2000, led his team to a Valero Alamo Bowl win and won MVP honors in route to an 11-2 record and Top 10 national ranking.

Now a year later, Mariota has his #2 Ducks well positioned to be playing for a National Championship and is currently the odds-on favorite to win the Heisman Trophy.

If Mariota goes on to win the Heisman Trophy, he would become the fourth Valero Alamo Bowl alumni to receive the award, joining Charles Woodson, Robert Griffin III and Crouch.

Mariota is a rare combination of size, speed and skill and is at the top of nearly everyone’s NFL Draft boards. Standing at 6-feet-4 and 219 pounds, he is a Swiss Army knife of a quarterback. He frequently out runs opposing defenses with his speed, carves up secondaries with his strong throwing arm and is big and strong enough to fight off defensive linemen.

On the year, Mariota has thrown for 2,780 yards and 29 touchdowns with only two interceptions while adding 524 yards and eight touchdowns on the ground. For his career, the Hawaiian native has accumulated 9,122 passing yards, 92 touchdowns and just 12 interceptions.

Oregon, 9-1 overall and 6-1 in the Pac-12, has already clinched the Pac-12 North division and will face Colorado and in-state rival Oregon State before playing in the Pac-12 championship game on December 6.

So as Mariota closes out what many assume will be the final year of his collegiate career, he will be chasing history.

Will history repeat itself?