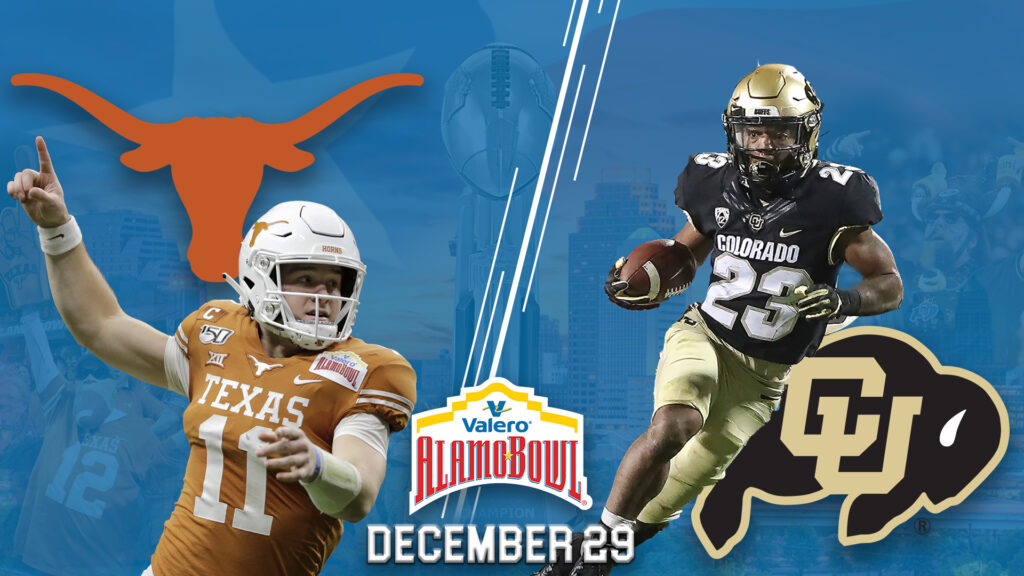 Attendance in the 65,000 seats facility will be capped at 11,000 and follow the same safety plan the Alamodome used to successfully host six UTSA football home games.

Designated the away team and occupying the east sideline, Texas returns to San Antonio for the second year in a row. The Longhorns led by Head Coach Tom Herman, in his 4th season, will look to defend their crown as Valero Alamo Bowl Champions and maintain Herman’s perfect record in bowl games.

The Longhorns are led by fourth year quarterback and 2019 Valero Alamo Bowl Offensive MVP Sam Ehlinger who has produced 2,788 yards of total offense and 33 total touchdowns this season. His 202 points responsible for are the third-most in the country, and he also ranks third in points responsible for per game (22.4) and eighth in passing touchdowns (25), while leading the Big 12 in those categories and total offense (309.8). His running mate on offense, freshman Bijan Robinson, has 679 total yards and three touchdowns since taking over the starting role.

This will be Texas’ 57th bowl game appearance, second only to Alabama (72) in NCAA history. The Longhorns are 30-24-2 all-time in bowl games, tied for the nation’s fourth-most bowl victories.

Designated the home team and occupying the west sideline, the Colorado Buffaloes return to the Valero Alamo Bowl for the first time since 2016. The Buffaloes are led by Pac-12 Coach of the Year Karl Dorrell, who is in the midst of an impressive inaugural season in Boulder. He is the first first-year head coach to take over the Colorado program starting the year unranked and coaching the team into the national polls.

The Buffs have far exceeded expectations, with many in the media projecting them to finish at the bottom of their division in the Pac-12 South. The offense is led by Pac-12 Offensive Player of the Year running back Jarek Broussard who has 813 total yards with a 6.3 yards per carry average this season.

They are quarterbacked by senior Sam Noyer, who played safety in four games for the team last year, who has six passing touchdowns and five rushing touchdowns in only five games this season.

The defense is led by a pair of outstanding linebackers, nicknamed “The Dynamic Duo” these two have been a terror for opposing offenses all season. First is Butkus semifinalist ILB Nate Landman, who paces the team with 53 tackles. His running mate OLB Carson Wells leads the team in sacks with 4.5. Unfortunately, Landman will miss the game due to injury.

This is the be the 19th meeting between these two teams. The first coming in 1940 and the last in 2009 when the Buffaloes still played in the Big 12. Texas leads the all-time series 11-7. Texas has won seven of the last eight meetings, including each of the last five.

Texas will be playing in its fifth Valero Alamo Bowl, breaking a tie with Iowa and Oklahoma State for the most all-time appearances.

With a win, Texas seniors will finish 4-0 in bowl games with wins in the Texas Bowl, Sugar Bowl, and the 2019 Valero Alamo Bowl.

The Longhorns will be the first ranked team that the Buffaloes have faced this year.

Both of these teams will feature a running back averaging more than 6 yards a carry. Texas RB Bijan Robinson is coming in at 6.8 yards per carry, good for first in the Big 12, and Colorado’s Jarek Broussard is averaging 6.3.

Each of these teams has two players from the San Antonio area. OL Derek Kerstetter (Reagan) and LB Cort Jaquess (Churchill) of Texas and LB Devin Grant (Antonian) and OL Chance Lytle (Churchill) of Colorado all hail from the Alamo City. Lytle, who is out for this game, played alongside Jaquess for the Churchill Chargers who went 11-3 their senior year.

Eleven Valero Alamo Bowls since 2005 have been decided in the final minutes of the game including the 2017 and 2018 games that were each decided by two points.

The 2020 Valero Alamo Bowl is digital and available here.