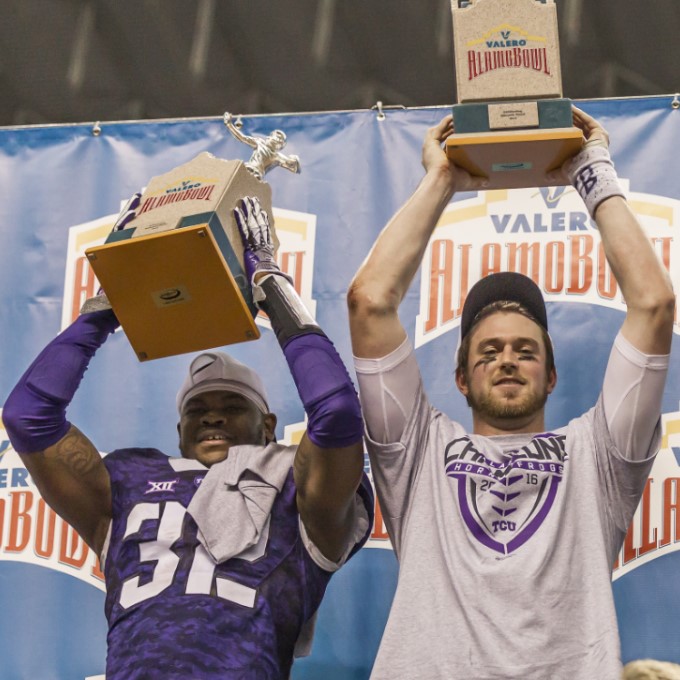 The Valero Alamo Bowl has established a new agreement with the Big 12 and Pac-12 conferences to extend the existing relationships through 2025.

The six-year extension, which starts in 2019, will ensure the Valero Alamo Bowl continues to feature the first choice of teams from the Big 12 and Pac-12 conferences after the College Football Playoff selections.

“The Big 12 Conference’s long-standing relationship with the Valero Alamo Bowl has produced some unforgettable games,” said Bob Bowlsby, Big 12 Conference Commissioner. “The Valero Alamo Bowl and San Antonio have been terrific hosts for our member institutions and their fans and we are excited to join the Pac-12 to continue our relationship through 2025.”

The Valero Alamo Bowl is currently in the third of a six-year agreement with the Big 12 and Pac-12. The past two games have delivered Top 15 match-ups whose outcomes were undecided until the final minutes. Following the 2015 season, #14 UCLA held off a second half comeback from #11 Kansas State to win 40-35.

Last year, #15 Oregon had an early lead but #11 TCU staged an NCAA bowl record tying comeback to beat the Ducks 47-41 in triple overtime. In addition to the fourth capacity crowd in the past five years, the game featured a bowl record peak viewership of 10.9 million and a $45.8 million total economic impact on San Antonio.

“The Valero Alamo Bowl has a well-deserved reputation for exciting games played in front of sellout crowds and top TV viewership,” Larry Scott, Pac-12 Conference Commissioner. “Our universities and their fans look forward to their trips to San Antonio and playing top ranked schools from the Big 12 Conference.”

Last year, the Valero Alamo Bowl reached a 10-year extension with ESPN to continue its relationship that began with the inaugural game in 1993. The agreement starts with the 2016 Valero Alamo Bowl this December and includes broadcasting rights to the game across ESPN’s platforms through 2025.

The Valero Alamo Bowl has produced seven of the Top 25 most-watched non-BCS/non-CFP broadcasts in ESPN history.

“Our Big 12 vs. Pac-12 match-up featuring their top teams outside of the CFP on ESPN has produced tremendous results for our community,” said Lamont Jefferson, Chairman of the Valero Alamo Bowl. “The Valero Alamo Bowl and San Antonio are celebrating the announcement that this winning relationship that will continue through the 2025 season.”

The Valero Alamo Bowl is an annual post-season collegiate game played in the 65,000 seat Alamodome in San Antonio. The game is annually broadcast on ESPN and showcases two of the premier conferences in the country, featuring the #1 Pac-12 team against the #1 Big 12 team after the College Football Playoff selections.

This season the Valero Alamo Bowl is projecting a $72 million total economic impact on San Antonio and record local scholarship giving of over $500,000 as the organization will host two games.

The Shamrock Series between Notre Dame and Army will kick off on Saturday, November 12 at 2:30 p.m., while the bowl game occupies a prime time slot unopposed from any other games on Thursday, December 29 at 8:00 p.m.

Tickets for both games are available online through www.alamobowl.com. Information about the Valero Alamo Bowl’s mission and community outreach efforts are at: https://www.alamobowl.com/about/community-outreach/