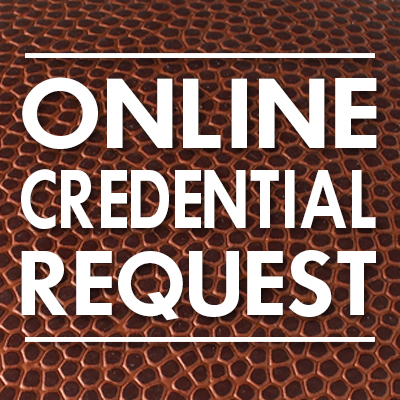 To be considered for credentials, please check back for updates and additional information this fall.

Media Will Call
Credentials will not be mailed. However, individuals may claim all passes issued to his/her media organization.

Pick-up is at the Media Headquarters at the Alamodome during posted Media Headquarters hours. On game day, Will Call will be located at the Alamodome at the East Plaza Entrance (50 yard-line by train tracks) where it will open at 2:30 p.m.. A table will be located inside the East Plaza Entrance with the media elevators also located adjacent to the Will Call table.

Guidelines
Preference will be given to media who cover all the home and away games of participating teams as well as South Texas media who routinely cover events on the Valero Alamo Bowl’s year long calendar. Media that cover all the home games of either of the two schools receive the next priority.

As a general rule, if either participating school hasn’t credentialed you for multiple games during the regular season, you won’t be credentialed for the Valero Alamo Bowl.

Policies
The Valero Alamo Bowl reserves the right to revoke any credential used by individuals not fully accredited, or an individual not in compliance with normal press box and/or sideline standards. Acceptance of credentials constitute agreement by the bearer and his/her media organization to abide by the conditions as prescribed by the Alamo Bowl.

No spouses, dates or children will be allowed in Alamodome media facilities or on the sideline.

“Media” credentials will provide access to the press box and the field pre- and post-game.

“Photo” credentials/vests for sideline photographers will be issued under the following guidelines:

The Valero Alamo Bowl will issue credentials to NFL and professional football scouts on an “as-available” basis. After a capacity number is met, scouts will have to purchase a game ticket.

Get Your Tickets Now

Don't miss your chance to make unforgettable memories at this year's game and ancillary events.

No city lays out better for major events than San Antonio. Explore everything our city has to offer.