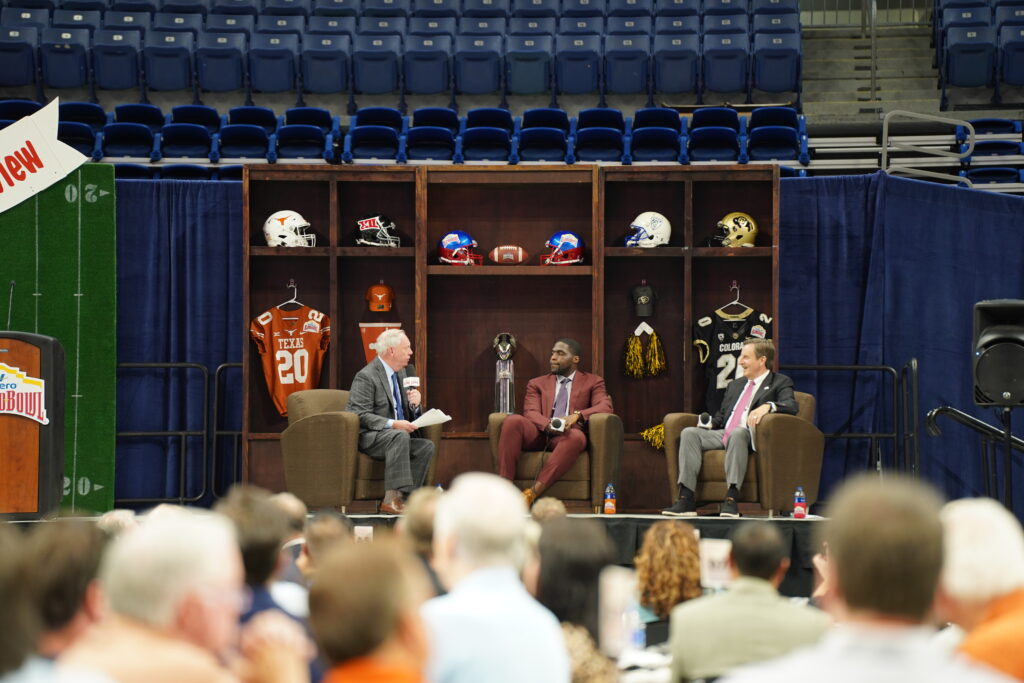 Come celebrate the start of the college football season at the PNC Pigskin Preview Luncheon on Wednesday, August 31.

In addition to the meal courtesy of Rudy’s Bar-B-Q on the Alamodome’s football field, guests will:

Complimentary parking is available in Lot A with registration and games opening at 11 a.m. and the hour-long program starting at noon.

Tickets are available for $70 through the Bowl website. Proceeds from the event benefit the Bowl’s two scholarship programs. Winners of the Valero Alamo Bowl Community Partners Scholarships will be announced at the luncheon with these rising college juniors and seniors in attendance.

For 2022, the Valero Alamo Bowl with the help of our partners and ticket buyers has pledged to increase last year’s record scholarship giving as 165 winners split $1.1 million in awards. Please reward the below Pigskin Preview sponsors with your patronage.

A four-year starter at the University of Texas, Acho was team MVP his senior season in 2010 and won the William V. Campbell Trophy, given annually to college football’s top scholar-athlete, as well as the Wuerffel Trophy, college football’s premier award for outstanding community service.

The Arizona Cardinals selected Acho in the fourth round of the 2011 NFL Draft. In his first season, he recorded seven sacks, the second-most ever by a Cardinals rookie. After four seasons with the Cardinals, Acho played four seasons for the Chicago Bears where he was nominated twice for the Walter Payton NFL Man of the Year Award. He played the 2019 season with the Tampa Bay Buccaneers before retiring.

In October 2020, he released his first book, Let the World See You: How to Be Real in a World Full of Fakes. In it he shares lessons from his own life as well as stories from others to reveal how you can overcome your fears and discover your true selves.

On September 16, 2022, Acho and Kevin Durant will lead 11 former Texas athletes that will be inducted into the Texas Athletics Hall of Honor.