Tis the Season for Giving!

For the 2014 holiday season the Valero Alamo Bowl will again team up with San Antonio Food Bank for the “Fill the Bowl” fundraiser to help provide meals for local families. For each $20 (cash/credit card) or 20 items donated to the San Antonio Food Bank, you will receive one complimentary ticket to this year’s Top 15 match-up courtesy of Valero.

There is not a limit on the number tickets each person can receive but tickets are first come, first served on Monday, December 29, 2014 from 9:30 a.m. to 4 p.m.

Tickets are available as supplies last at the Food Bank’s volunteer entrance at 5200 West Old US Highway 90, San Antonio, Texas 78227 (phone: 210-337-3663). Stop by on Monday to donate and receive your complimentary tickets!

With the support of Valero, the “Fill the Bowl” event is held every year. This season the Bowl is trying to break the record number of donations that was set in 2012 when 187,428 pounds of food were collected for the San Antonio Food Bank. That total was enough to provide 146,428 meals for South Texas families. 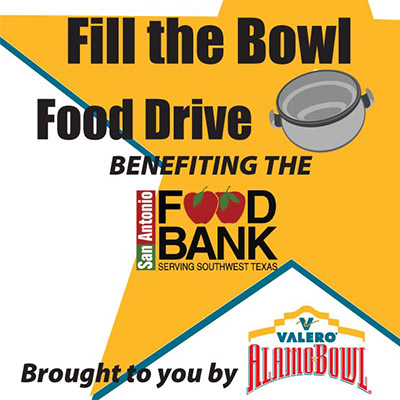